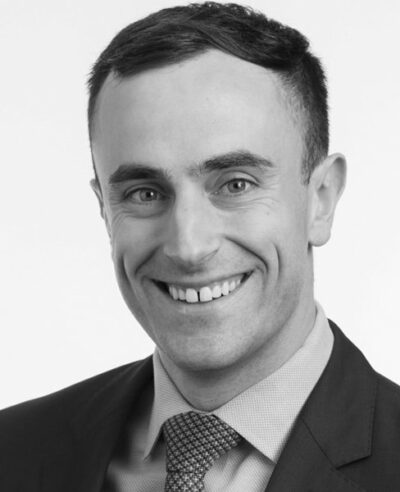 Current law firm or association: Reed Smith LLP
Past associations (if any): None!
Law School: Georgetown University Law Center
Undergraduate: University of Pittsburgh
Spouse (if any): Farren Liben
Children (if any): We have three boys: Avi (8), Levi (4), and Asher (almost 10 months)
Current home town: Pittsburgh, PA
Favorite bar or restaurant in current home city?  Why? It’s probably Eddie V’s, but in terms of actual Pittsburgh restaurants, Morcilla.
EMLF Involvement: I am the co-chair of the Young Professionals Committee, and a member of the Board of Trustees.  I have been attending (and occasionally speaking) at conferences for most of the last decade.

Do you have a favorite anecdote or war story regarding your time as a lawyer? Many.  None I’ll put in writing.
Where did you grow up? My parents split up when I was fairly young, and I shuttled between my mom’s house in the New York suburbs, and my dad’s apartment in the Bronx.  I did most of high school at a boarding school in southern Maine.

What is your area of practice? I am a traditional oil and gas litigator.  I handle disputes for E&P and midstream companies regarding oil and gas leases, royalty claims, trespass claims, condemnations, contractor disputes, JOA disputes, and others.

How did you get involved in that area of law? Pretty dumb luck, at least initially.  I did both law school summers at Reed Smith, and a friend who was a year ahead of me had begun working with our oil and gas litigators.  She suggested I do the same, and it basically went from there.  I have remained involved in my practice, however, for a number of reasons.  Among others, I greatly enjoy our team at the firm, I think the work is both interesting and important, and I’ve been lucky enough to gain a ton of real world litigation experience throughout my career.

You have spoken at a couple of EMLF events and have been involved in EMLF committees. Has that involvement benefitted you?  If so, how? Absolutely.  Attending the conferences is a great way to meet folks, but working with someone on a presentation, or a committee, allows you to really establish a relationship over time.

Now that some of the COVID-related restrictions on restaurants, gatherings, and travel are ending, is there anything in particular that you have done or look forward to doing soon, that you were able to do during the shutdowns? My wife and I went to Key West in July (it’s a little warm), a trip that was originally supposed to occur in April of 2020.  Fingers crossed we will be taking the (two older) boys to Disney in November, so I’m looking forward to that if it ends up happening.

You’re still a young lawyer, but have been practicing a bit more than a decade.  Looking back, what two or three things have been most helpful to you in developing as a lawyer and a s a young partner at your firm? I appreciate the “still young” piece of this question!  One of the things that has been most helpful to me has been developing my network through involvement in organizations like EMLF.  As a new lawyer, coming to conferences or meetings can be remarkably intimidating – you don’t know anyone, or really, anything about what’s happening.  But continuing to come back has allowed me to really work on building my network in the industry and getting to know lots of people I otherwise wouldn’t.  On the “work” side of things, I’ve found it important to take as many opportunities as I can.  Especially as a new lawyer, even if it’s something new or intimidating, I think it’s helpful to take the deposition if offered, to prep the witness with the partner, to go to the client meeting even if it’s just to observe.  So much of what we do can really only be learned by doing.  And then doing again, and again, and again.

Is there any advice you would give to new lawyers and law students who are about to become lawyers? Something that I think was true for me as a younger lawyer, and now, is that you have to know the facts of your case, and you have to know them better than anyone else.  The law is, of course, important, but you cannot analyze and apply that law properly until you have a solid understanding of the facts of your case.  I think young lawyers that can play this role on their case teams make themselves quickly indispensable.

END_OF_DOCUMENT_TOKEN_TO_BE_REPLACED

EMLF is now accepting topic and speaker proposals for the 2022 Fall Symposium (f/k/a...