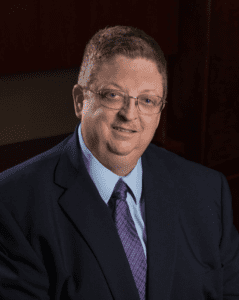 You have spent most or all of your career representing mining and industry clients on employment law and safety issues, and have had a lot of success. How did you get involved in this area of law? With strong roots in Kentucky, I came to Charleston, WV, in 1989 to a firm doing labor and employment, safety and environmental work for most of the major coal firms in the 1990s. I was able to build a practice with my military law experience in environmental and labor law by working on projects for very experienced members of the firm, learning from them, and working during significant national coal strikes. I began handling mine safety cases about 1992 and that grew to be a major part of my practice over the years. To stay current, I remain very active in EMLF and the American Bar Association’s Labor and Employment Section and its Workplace & Occupational Safety and Health Law Committee.

Over the years, you have been very active in various mineral law and industry organizations, including EMLF, even though you had a busy practice. Why? What has EMLF meant to you? Has your involvement had a positive effect on your career? I actually started working with the Mineral Law Center at UK in 1990 and the fall Mineral Law Conference that became part of EMLF. I started attending and speaking at EMLF meetings in the mid-1990s and still believe our organization is one the best in the energy industry to learn the law, have opportunities to speak and present papers and get to know both in house counsel and fellow practitioners in this field.

You were in the U.S. Judge Advocate General’s Corp. How long were you in the JAG Corp and where were you stationed? A total of three years. After completing the 12 week, 112th JAG Basic Course in Charlottesville, VA, I was assigned to the Garrison JAG office at Fort McPherson, in Atlanta, GA. As a Captain, I served as military prosecutor, Special Assistant US Attorney for offenses tried in US Magistrate Court, and later served as a Magistrate who reviewed and authorized search warrants. My last year, I was Labor Counsel and finished my tour there as an Administrative Law Attorney. I enjoyed my military service and was able to begin trying cases within about two months of arriving at Fort Mac.

Do you find time to travel for fun? Do you have a favorite place to visit? My dad served 21 years in the Air Force, so growing up, I lived in the Philippines and England along with Kentucky, Tennessee and South Carolina. As a military dependent, you got used to constant travel and change. Today, I love to travel to national parks and historical sites. Whether it’s an EMLF or ABA meeting or an out of town business trip, I try to visit a lighthouse, national park or historical home nearby. After our June Annual Institute at Amelia Island, I visited the Tybee Island Lighthouse and the Mighty 8th Air Force Museum in Savannah on my way back to Charleston.

Any hobbies? Growing up, my grandparents lived near the Lincoln Birthplace in Hodgenville, KY, and I visited it regularly. That led me to collect Abraham Lincoln memorabilia – calendars, book ends, Civil War era prints and books about him. I also collect Coca-Cola memorabilia from the 1940s on. When I travel I will look for old bottles and cans to add to my collection.

Favorite sports teams? I still follow both UK and Western Kentucky football and basketball. I was a sports writer and sports editor for the Western student newspaper and I still attend Western games, including key away games. Last fall, I traveled to West Point and Michigan State for football and have attended several Western bowls, including last year’s Boca Raton Bowl. I even managed to attend a UK SEC tournament game in Tampa last March.

You have been practicing law for a while and have had success. Is there any advice you would give to new lawyers and law students who are about to become lawyers? Almost no one ends up practicing in the exact area of the law they plan to work in. I think it’s important to have an open approach as you begin to build your skills in law school and in your first jobs. Almost all of us end of up working in the areas we enjoy, but it’s surprising how few had a complete plan coming out of law school of how to reach that goal. I also think EMLF is a great opportunity for law school students to meet and learn from practicing attorneys as they prepare for their legal careers. I highly recommend involvement in EMLF and the American Bar Association as two organizations that are a great way to learn your field and meet attorneys from across the US.

END_OF_DOCUMENT_TOKEN_TO_BE_REPLACED

Join us for a Live Webinar: Legal Ethics – 2022 Year-End Update

END_OF_DOCUMENT_TOKEN_TO_BE_REPLACED

THE EUGENE KUNTZ CHAIR IN OIL, GAS, AND NATURAL RESOURCES

THE EUGENE KUNTZ CHAIR IN OIL, GAS, AND NATURAL RESOURCES THE UNIVERSITY OF OKLAHOMA...

END_OF_DOCUMENT_TOKEN_TO_BE_REPLACED

The EMLF Fall Symposium is right around the corner- October 11 through 13- and this...

END_OF_DOCUMENT_TOKEN_TO_BE_REPLACED

Attendees gathered at the Frances Perkins Department of Labor Building in Washington,...

END_OF_DOCUMENT_TOKEN_TO_BE_REPLACED

EMLF’s annual Fall Symposium will be held on Wednesday October 12 and Thursday October...

END_OF_DOCUMENT_TOKEN_TO_BE_REPLACED

By: Keith B. Hall, LSU Law Center Ralph and Florence Hunnell own the surface estate of a...