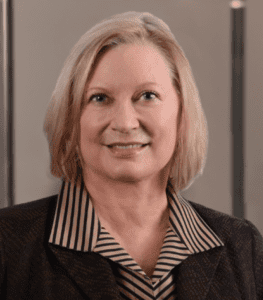 Current association: Jackson Kelly PLLC
Past associations: At Jackson Kelly since law school! I was a summer student in 1979 as well.
Law School: West Virginia University College of Law
Undergraduate: West Virginia University (B.S., Business Administration)
Home: Denver
Favorite restaurant in Denver: There are many to choose from and many who went under during the pandemic.  That said, the street vendor who makes awesome burritos on the corner outside our office building is a definite go to for authentic Mexican food.
EMLF Involvement: Member of Board of Trustees, Chair of 1993 Annual Institute, speaker in 2005 and 2011 Annual Institutes. Speaker, moderator, and planning committee at several EMLF Workplace Safety Special Institutes held in conjunction with the Department of Labor.
You have spent most, or all your career representing mining and industry clients and have had a lot of success. How did you get involved in this area of law? I grew up in the coal fields of Southern West Virginia. My mother’s family had ties to mining, but my father was a C.P.A. who had transplanted to the coalfields to open his office. I had many friends with parents who worked in the coal mines, but I didn’t know that much about the actual work.  One of the associates who had started with me at Jackson Kelly, left the firm. He had been handling one case under the Mine Act that was transferred to me.  I found that I really enjoyed learning about mining processes, equipment, and working with the people in the industry.  They are hard workers who took time to teach you about what they do.  From there, I built a practice that sustained me and several other attorneys.

Over the years, you have been very active in various mineral law and industry organizations, including EMLF, even though you had a busy practice. Why? As a young practitioner, it was important to learn all you can, including networking skills. These organizations are perfect vessels for honing your skills and making contacts with others who can help you. It is important to be a contributor to the organization to cover the cost of what you get in return.  This happens when you serve as a mentor, share your knowledge as a speaker or active participant on committees, and as a leader.

What has EMLF meant to you? The EMLF will always be the first professional organization that taught me what it meant to be a part of a subset of the legal profession who has many commonalities in assisting clients in the energy and mineral law fields.  Your fellow members share their time to educate and lift the membership.  Many friendships are formed in the organization.

Has your involvement had a positive effect on your career? Absolutely!  The year that I chaired the Annual Institute was the same year I relocated to Colorado in 1993. Sharon Daniels and I were invited to the Rocky Mountain Mineral Law Foundation (now known as the Foundation for Natural Resources and Energy Law) Annual Meeting in Vail by their executive director who had attended the EMLF Annual Institute as our guest.  My involvement in the EMLF had demonstrated to me the importance of involvement with any organization dedicated to expanding and sharing knowledge and doing so in a congenial setting. This was especially important to me since I was basically new to western mining.  Participating in EMLF helped me obtain the fundamentals of being a good steward of all that makes us the professionals we are and aspire to be. That experience was transferrable to the move that I made to the west and enabled me to build on those skills in developing the Denver office.

You are originally from the east, but now live in Denver.  How does living in Denver compare to living in West Virginia? Well, both are mountain states, and interestingly, many West Virginians live in Colorado. When I first moved here the pace was a bit slower and the population was much more manageable.  Over the years, we have seen the population on the front range, east of the mountains, grow to the point where we have a lot of issues common to other big cities like crazy traffic and skyrocketing housing prices.  Many of the social issues in Denver are like those in West Virginia, just a on a larger scale.

You are active in a couple of animal welfare organizations.  I bet that means you have pets of your own. Do you? I have always had dogs even though my travel schedule is not terribly conducive to it.  I have an Australian Labradoodle who will be 10 this year.  His name is Doc Holiday since I brought him home over the Christmas holiday.  “Doc” was in honor of a great physician who repaired a ruptured cornea I sustained right before Thanksgiving 2012 in a freak accident.

Do you find time to travel for fun? Do you have a favorite place to visit? I like to travel and one of my favorite places to visit is Alaska.  I sometimes go for work, but also try to fit in a fishing trip for salmon or trout depending on the time of year. Going for work in the winter is not quite as pleasant since one site is in the Arctic Circle and home to lots of dangerous critters, including polar bears. I have handled cases in Alaska in matters of workplace safety involving bear attacks on workers in remote property locations. I also traveled to Africa twice with a client and friends. The client operated properties on the continent. The company physician traveled with us to Rwanda for a mountain gorilla trek and to experience the Serengeti migration. He sure was a great travel partner as he is a medical professional, speaks Swahili, owns and operates his own camps in Tanzania, and designs tours. He is also a pilot and flew us to Zanzibar – that was an interesting place. Colorado is a great place to fly fish which I try to do as often as possible. Skiing and hiking are some favorite activities close to home.

You have been practicing law for a while and have had success.  Is there any advice you would give to new lawyers and law students who are about to become lawyers? Yes, I do. Take every opportunity to learn your craft and put in the hours to be a leader in your field. You will recognize that different mentors, clients, colleagues, organizations, and others helped you get to where you are. When taking that inventory (and do it early and often), give credit to those who have assisted you and emulate their role(s) in doing the same for others coming up behind you. Give thanks to those who were important to you in developing your career path and be kind and mindful in your practice. It makes work and life much more enjoyable.

END_OF_DOCUMENT_TOKEN_TO_BE_REPLACED

EMLF extends a warm welcome to our summer intern, who will be assisting with Foundation...

END_OF_DOCUMENT_TOKEN_TO_BE_REPLACED

ESG Trends and Developments: How the SEC and Other Federal Agencies Have Stepped Up ESG and EHS Regulations in 2022

This program is sponsored by Reed Smith and will focus on selected ESG developments...