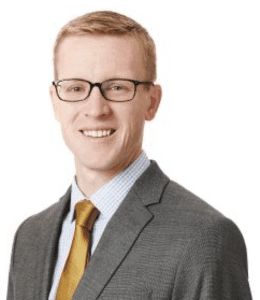 Favorite bar or restaurant in current home city? Why?: I love Morcilla, a Spanish tapas restaurant in Pittsburgh’s Lawrenceville neighborhood, because of the cozy atmosphere and incredible food.

Do you have a favorite anecdote or war story regarding your time as a lawyer? One that comes to mind occurred pretty early in my career. In 2013, I assisted in filing the first forced pooling application for an unconventional gas well unit under the Pennsylvania Oil and Gas Conservation Law, which was enacted in 1961. The statute did not apply to the Marcellus shale, but a Texas based E&P company was developing the Utica shale near the Ohio border and based on an article I co-authored with my mentor on the topic a few years earlier, we were engaged to make a run at using the law to integrate some unleased acreage into an unconventional drilling unit. The application we filed was treated to a game of jurisdictional hot potato between the Department of Environmental Protection (DEP) and the Environmental Hearing Board (EHB) because the statute provided that applications be made to the now defunct Oil & Gas Conservation Commission. When we initially filed with DEP, it informed us that the EHB had jurisdiction. So we filed with the EHB, which ruled that DEP had jurisdiction. When we finally obtained a hearing date on our application from DEP, the landowners potentially subject to the forced pooling order intervened, and their attorney filed an original action with the Commonwealth Court seeking a declaration that the law was unconstitutional. Faced with a lengthy and costly battle before multiple tribunals, our client decided to withdraw its application. But it was very interesting to be a part of the process that started working out how this very old and rarely applied law must function in a new context.

Where did you grow up?  I grew up in and around Youngstown, Ohio.

What is your area of practice? Over the course of my career, the focus of my practice has shifted with the needs of the industries I have supported. I began my career writing title opinions for oil and gas exploration and production companies in the relatively early days of the Marcellus and Utica shale boom. As those plays matured, I began performing due diligence for asset purchases and litigating title and zoning issues. Over time my litigation practice broadened to include, for example, disputes stemming from construction of natural gas processing plants. While I still maintain a litigation docket, I have started getting back to my roots over the past couple of years as I turned my focus to the emerging solar industry, advising clients on real estate issues impacting early-stage development of utility-scale solar projects, including title issues, mineral severance, zoning, site control, and leasing.

How did you get involved in that area of law? I have been interested in the energy industry since before I started law school and knew going in that I ultimately wanted to advise renewable energy companies, understanding at the time that it would probably be years before those companies trained their sights on the Appalachian-region of the country where I would be practicing. During my third year of law school, I took an elective course in energy law and did my best to stand out amongst the class in the eyes of the professor. That approach paid off, as she eventually recommended me to a respected attorney who had recently opened the Pittsburgh office for a boutique oil and gas firm and was seeking a law clerk to assist in drafting an article about Pennsylvania’s forced pooling statute that I previously mentioned during my “war story.” Based on my work on that project, the firm hired me on full-time upon graduation. When I recognized a few years ago that solar technology had developed to a point of cost-competitiveness with other energy generation technologies I decided to invest a lot of time into understanding how my skill set could be used to support this emerging industry, and fortunately, my background advising the natural gas industry in land matters is also valuable to the solar industry.

How much of your time is spent representing clients in the coal, oil and gas, or other energy industries? I spend about 70% of my time representing solar and natural gas clients.

You have spoken at a couple of EMLF events and have been involved in EMLF committees. Has that involvement benefitted you?  If so, how? My involvement in EMLF has benefitted me greatly and the more I have become involved, the more I have benefitted. EMLF has been a valuable educational resource for me since the beginning of my career. It has provided opportunities to publish articles and gain exposure to energy clients. As I began to focus on solar energy, EMLF provided opportunities to meet and learn from other attorneys who are pursuing knowledge of this emerging industry by inviting me to speak at the first Special Institute on Solar. After joining the Board of Trustees in June, past president Tim Hagerty invited me to join EMLF’s new renewable energy committee, providing me with even more exposure to other lawyers engaged in thought leadership on the energy transition. Developing and testing my knowledge of the solar industry through EMLF’s programming and committee work has allowed me to develop a reputation within my firm and the legal community as a knowledgeable practitioner who understands the needs of the solar industry and the landscape of the energy transition.

Now that some of the COVID-related restrictions on restaurants, gatherings, and travel are ending, is there anything in particular that you have done or look forward to doing soon, that you were able to do during the shutdowns? I love travelling out West to ski the Rocky Mountains. In fact, my wife and I were in the air on our way to Denver for a ski trip in March 2020 when the NBA announced it was cancelling its season, which for me was the moment of realization that this virus was not some minor, fleeting event. Fortunately, we were able to ski for a couple of days before the resort shut down. The only flight I have taken since returning from that trip was to Memphis in June for the Annual Institute, and the pandemic landscape has taken a turn for the worse since then, but I’m hoping to hit the slopes again in early 2022. My younger sister is also scheduled to be married in Germany in May, but with recent developments it’s unclear whether we will be able to make that trip. Fingers crossed!

You’re still a young lawyer, but have been practicing about a decade.  Looking back, what two or three things have been most helpful to you in developing as a lawyer and as an attorney at your firm? The most important factor in my development as a lawyer has been the excellent mentorship I have received. I have been working with EMLF’s past president Kevin Colosimo for my entire career. He taught me how to practice law, he taught me about the oil and gas business, and he encouraged me to become involved in organizations like the EMLF and invest time in thought leadership with respect to the energy industry.  Similarly, since joining Frost Brown Todd in 2015, the firm has provided me the freedom to invest the time necessary to develop specialized knowledge of the solar energy industry so that I can provide value to clients leading the way in the energy transition.

Is there any advice you would give to new lawyers and law students who are about to become lawyers? There is one piece of advice I always give to law students, and even undergraduate students: Each semester, pick one of your professors with whom you will focus on developing a relationship. Always be prepared for that professor’s class, always participate in the class discussion, and attend that professor’s office hours. It is not unusual for practicing attorneys to reach out to law professors for recommendations about potential hires, so strive to set yourself apart in the eyes of at least some of those teachers. I landed my first job by getting to know my energy law professor in this manner. To new lawyers, my advice is to stay humble and focus on learning. Completing law school and passing the bar are only the first steps in learning the practice of law. At the beginning of your career, you don’t know what you don’t know. The more you practice, the more you learn how much you have to learn.

END_OF_DOCUMENT_TOKEN_TO_BE_REPLACED

EMLF is now accepting topic and speaker proposals for the 2022 Fall Symposium (f/k/a...