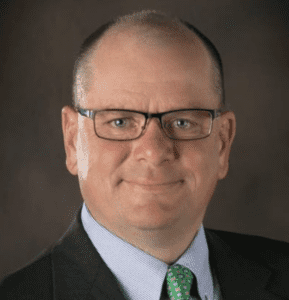 Current association: Jackson Kelly PLLC (Chair of the Business Dept and Managing Member of the Evansville, IN office)

Favorite restaurant:  St. Elmo’s (Indianapolis, IN) – the steaks are great but the shrimp cocktail is out of this world!

You have  spent most or  all of  your career in the energy sector and have had a lot of success.   How did you get involved in t his area of  law?  I’ve described myself as an “accidental” energy lawyer. In undergrad I studied economics and in the early years of my practice at Ice Miller my work was split between mergers and acquisitions and tax-exempt private and quasi-public finance. A couple years into my practice, a client of the Firm was selling their operations in the Illinois Basin, and I was assigned to be the junior level associate on the deal – presumably because the part of western Indiana where I grew up had some coal mining activity so I at least knew what a dragline was. I ended up getting assigned to a few more coal deals at Ice Miller, and then in 1996, four years into my practice of law, my wife and I decided to move to her hometown of Evansville as we began thinking about starting a family. Once in Evansville, the firm I ended up joining did some work for Black Beauty Coal Company – who happened to have been the buyer in the first coal transaction I worked on while at Ice Miller. Over time, I became more and more involved with Black Beauty and their transactional work, and then ultimately for other operators in the industry.

Over the years, you have been very  active in various organizations.  You have  particularly  committed  a lot of  time to EMLF even though you had a busy  career.  Why?  Once I started doing more and more coal work in Evansville, I thought it very important to find a group where I could tap into legal scholarship and a network of “coal” lawyers with hands on experience from whom I could learn. EMLF was and continues to be a tremendous asset in that regard. At some point in my life I came across the saying “we all drink from a well we didn’t dig.” That saying has stuck with me, and because of that, I think it is important to give back and involve yourself in groups and institutions that have helped you along the way.

What has EMLF meant to you? It has been a great resource for legal scholarship and for industry insight. Equally – if not more – important, it has been a great way to meet a number of lawyers whose company I really enjoy and who I consider personal friends.

Has your involvement had a positive effect on your career? Without question.

Do you find time to travel for fun?   Do you have a favorite place to visit?   For family travel I would have to say New York City/Broadway. Both of our daughters have been very active in theatre. Our family trips to NYC have created some of my favorite travel memories, undoubtedly topped by our 2015 trip which included Hamilton with the original cast. Aside from that, I’d generally say any place with a great golf course. In that realm it is tough to beat Cypress Point in the Monterey Peninsula.

Do you have any  hobbies?   Golf, more golf, college athletics, and playing the piano.

You have been practicing law for a while and have had success.  Is there any advice you would give to new lawyers and law students who are about to become lawyers?  In the practice of law, like so many aspects of our lives, over the long haul you get out of it what you put into it. I think for anyone who is intellectually curious and motivated, the practice of law can be both challenging and rewarding. But like any profession that’s worth doing, there are times where those challenges just seem like roadblocks and frustrations. It’s important to have people around you that believe in you – and equally, if not more important – to believe in yourself! The other advice I would give is to never ignore an opportunity to be kind and supportive of other people. You will be amazed how frequently that kindness and support is returned to you.

END_OF_DOCUMENT_TOKEN_TO_BE_REPLACED

Join us for a Live Webinar: Legal Ethics – 2022 Year-End Update

END_OF_DOCUMENT_TOKEN_TO_BE_REPLACED

THE EUGENE KUNTZ CHAIR IN OIL, GAS, AND NATURAL RESOURCES

THE EUGENE KUNTZ CHAIR IN OIL, GAS, AND NATURAL RESOURCES THE UNIVERSITY OF OKLAHOMA...

END_OF_DOCUMENT_TOKEN_TO_BE_REPLACED

The EMLF Fall Symposium is right around the corner- October 11 through 13- and this...

END_OF_DOCUMENT_TOKEN_TO_BE_REPLACED

Attendees gathered at the Frances Perkins Department of Labor Building in Washington,...

END_OF_DOCUMENT_TOKEN_TO_BE_REPLACED

EMLF’s annual Fall Symposium will be held on Wednesday October 12 and Thursday October...

END_OF_DOCUMENT_TOKEN_TO_BE_REPLACED

By: Keith B. Hall, LSU Law Center Ralph and Florence Hunnell own the surface estate of a...